Share to FacebookShare to TwitterShare to LinkedInShare to PinterestShare to Email

"In the Midwest" by Edward Hirsch

Most St. Louisans do not find the eastward drive on 64 from about Kingshighway to the Mississippi to be a pretty one. Looking through the car window, we see abandoned factories, the shell of the old armory, sprawling rusty train yards, and a crumbly old red brick building whose purpose has been degraded to supporting a neon Budweiser sign. "In the Midwest" describes places just like what we see on 64. For a change, it is not a poem that shows us scenes of rolling hills, blue skies, or lush green mountains. Rather, it shows scenes familiar to what we can see in our hometown, St. Louis.

In the poem, a man travels in the Midwest, wandering around in gloomy places like the ones we see everyday, but he sees them in a different and interesting manner that we at SLUH, being from the Midwest, should also try and see. He doesn't speak of these places as "ugly", like many among us would see them. Rather, he compares them to ancient ruins like those in "Byzantium." He sees and describes the often forgotten context that the warehouses thrived in. He views them as time capsules offering a glimpse into our past. His comparison of these drab commonplaces to ruins prompts the reader to think differently about our environment, too.

Maybe America is not so different from The Eastern Roman Empire. We consider the nation we live to be different than the nations we study in history. This poem helps us see that America is a lot like the Old World. Though thousands of years separate us from Byzantium and a lot has changed, certain things have remained constants. The continuity that has stayed true, is that throughout history, we have organized ourselves in different "empires" or "nations" that grow, reach their peak, then fall as consequence of their neglect of the environment. When I learned that the first sedentary civilization, Mesopotamia, was located in a extremely fertile rich land called the "Fertile Crescent", I was confused. Fertile, rich, and lush were not words I had ever associated with the stretch of land between the Tigris and Euphrates rivers of modern day Iraq. Nowadays, when I think of that area, I imagine sand and dust. Farmers in the fertile crescent had used up much of the fertile soil after hundreds of years of farming the same plots. As a result, the "Fertile Crescent" is now more of a "Sandy Crescent". The poem shows us how we in the US have also been abusing the land we cherish. We have "stripped the quarries, and stripped the land" with all the factories, railroads, and pollution that accompanied Capitalist America's rise as a new Rome.

If we continue on our path of needlessly exploiting nature for industry and profit, future archaeologists might wander through the Midwest only to find dry desert dotted the ruins of our America: the acres of train yards, parking lots, and industrial parks. They might wonder what happened and how. They too, might be in disbelief to hear that the sand beneath their feet had had once been rich soil, feeding the population of a global superpower.

By looking at our present landscape through the perspective of history, we gain a new insight that we Americans are not an invincible force here to stay on earth forever. We discover that we too are susceptible to ignorant self destruction. If we exploit the environment, we may lose our fragile ground just like others before us have. Anybody who cares about the environment, loves history, or enjoys thinking with a new insight on the environment around us would benefit from the perspective "In the Midwest" offers. After a close reading, you'll see that eastward drive on 64 through a different window. 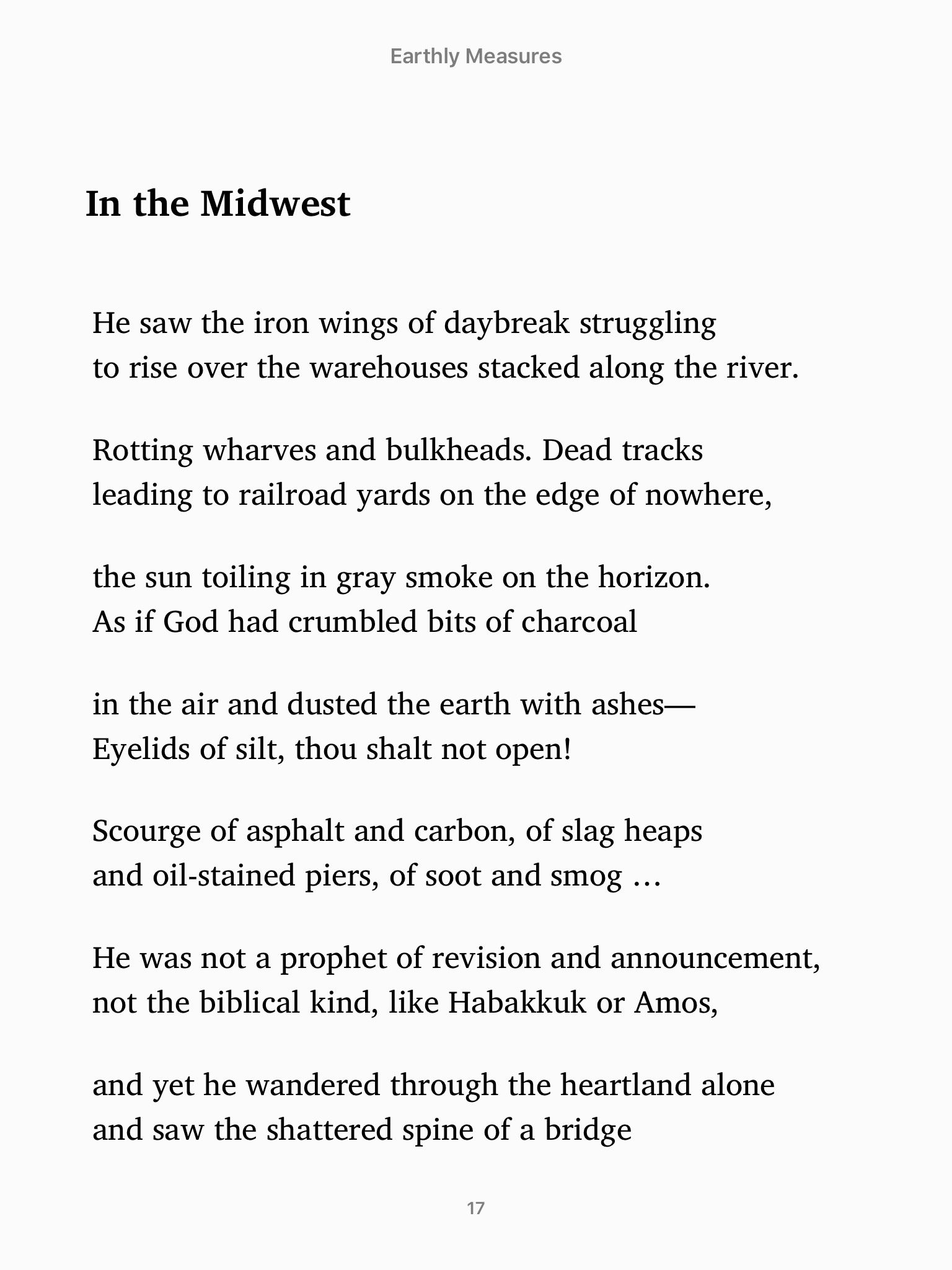 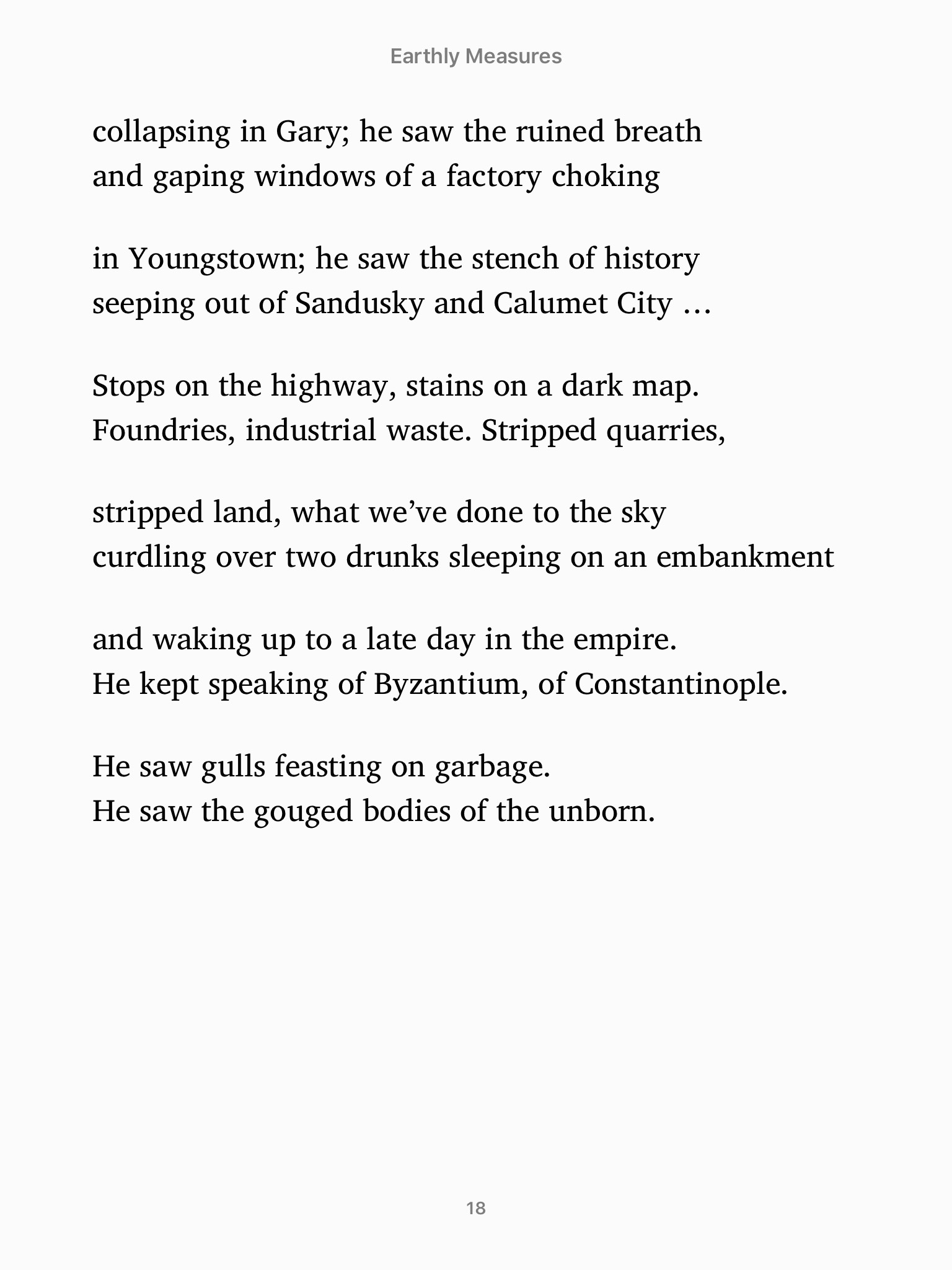 a spirit of april

For ages, poets—William Shakespeare, Emily Dickinson, and Langston Hughes, to name but a few—have been inspired by the month of April. From Geoffrey Chaucer’s famous celebration of April’s “sweet showers” in his opening to The Caterbury Tales to T.S. Eliot’s unforgettable lament in “The Wasteland” that “April is the cruelest month,” April figures prominently in some of the greatest poems. Perhaps this is because as both in nature and the spiritual season of Easter, April is a time of renewal and rebirth, a time when nature explodes with new warmth, new color, new life--or as the great Jesuit poet, Gerard Manley Hopkins, wrote in his poem, “Spring,” “all this juice and all this joy.”

Thus, it is fitting that April is National Poetry Month. To celebrate and to promote the reading of contemporary poetry, the SLUH Junior English teachers are sharing a poetry “recommendation” from a SLUH junior of a memorable poem on each of the remaining school days in April, a product of the Junior English independent poetry project. Please sample and enjoy these poems and nominations; though many will offer the opportunity, as Robert Frost famously quipped about poetry, to “begin in delight and end in wisdom,” you may find some of these poems will challenge you, even push you toward growth that may make you uncomfortable. Please know we offer these poem's in a spirit of goodwill and, well, a spirit of April.