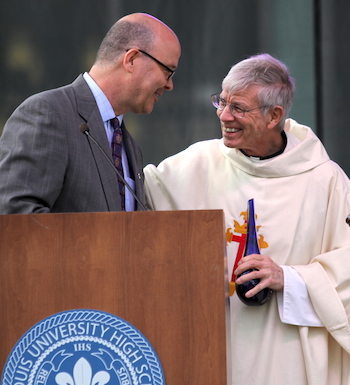 Fr. Baltz grew up on his family farm in Florissant, Missouri. At SLUH, he was a member of the football team. Upon graduation in 1958, he went to the Comboni Missionary Seminary.

He was ordained a priest in 1967 and left the United States in 1975 and for 42 years became a missionary messenger of the Gospel to the people of Uganda. He survived the dictatorship of Idi Amin, all the while ministering to those who were victims of the oppression, violence, injury and death. He lived for three years in a refugee camp in Congo, ministering to the displaced. He delivered the Eucharist by riding his bicycle throughout the places of those he served, with his Mass kit strapped to his back.

The St. Louis Review documented his ministry in a 2016 article.

He ministered to people in 60 chapels, had a “parish” of 50,000 Catholics and 27 primary schools. He did so by bicycle, establishing catechesis programs throughout the territory. It is said that he logged 50,000 miles by bicycle in Africa. In bringing the Sacraments to people throughout the territory, it was not uncommon for Fr. Baltz to baptize 30-40 infants at a time and one memory is of his baptizing 160 infants at one time.

Following his 50th reunion at SLUH, Fr. Baltz wrote back to SLUH to let us know he would not be able to make it to his 55th reunion. He wrote: “I’m writing from my mission among the Logbara tribe, up in the northwest corner of Uganda, in east-central Africa… Unfortunately, I will not be able to make it to my 55th reunion…as I’ll be here in my beloved mission in Uganda. But I can certainly offer a Mass for all the classmates, both living and dead…by the way, since returning to Uganda after our 50th reunion, I’ve pedaled another 13,089 miles…I call it “biking for Jesus.”

Thank you, Fr. Baltz, for your witness to the Gospel. Today, we present to you the Backer Award and I invite all present to join me in congratulations. 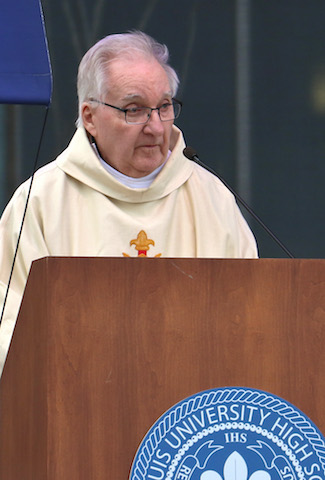 Fr. Houlihan grew up just west of SLUH and attended St. James in Dogtown. The youngest of several brothers, he was the only member to attend St. Louis University High School, with his older siblings attending CBC. Ordained on June 9th, 1965 at St. Mary’s College in St. Mary’s, Kansas, Fr. Houlihan has a dedicated and continuing ministry to Jesuit secondary education with impact all across the United States.

Fr. Houlihan taught Latin as a scholastic at SLUH and following ordination was a teacher of religion at DeSmet Jesuit, where he also became Principal. Now, imagine this, he moved immediately in 1974 from being Principal at DeSmet to Principal at St. Louis University High School, where he served as Principal for five years.

In 1996, he returned to SLUH to teach Theology and Latin, and since 2005 has also served as the Assistant to the President for Mission. Fr. Houlihan was among the founding Board members for the Jesuit Secondary Education Association – which coordinated the national vision for Jesuit Secondary education in our Country. He has been instrumental in serving on a multitude of Catholic educational boards, both high school and university.

View a SLUH Archive interview with Fr. Houlihan (below). 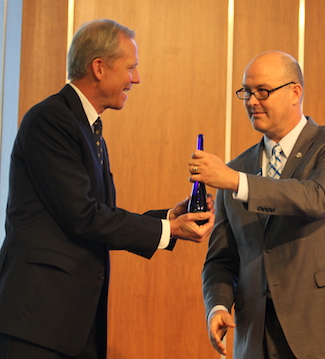 Joining Tom today are his wife Mary Pat, his brother Don Santel ‘78 (in from California), his 1976 classmate and friend Chris Fava and his wife Mary, and long-time SLUH faculty member and dear friend Mr. Jim Raterman.

Tom and his brother Don are the sons of Walter and Catharine Santel. Tom’s father was a member of the teamster’s union in St. Louis and together with Cathy knew they wanted a Jesuit education for their sons.

Tom is a graduate of two universities: SLU – Accounting, UMSL – MBA. In 2011 he did a fellowship year at Harvard in their Advanced Leadership Initiative Program. After graduating from SLUH, where he was proudly Chief Editor of the Prep News under the direction of Mr. Raterman, he began his career as a Certified Public Accountant at Earnst and Whinney. Soon thereafter, he became a budget analyst for Anheuser-Busch. He finished his career at Anheuser Busch as the President and CEO of Anheuser Busch International and the Vice President for Corporate Planning.

Tom is an avid reader, with particular interests in history. Since the late 1980’s, he has made retreats at White House Jesuit Retreat. His experience with Jesuits during his postgraduate days, along with his passion for reading, piqued his interest in Jesuit spirituality.

Examples of Mr. Santel’s commitment to the Common Good include: 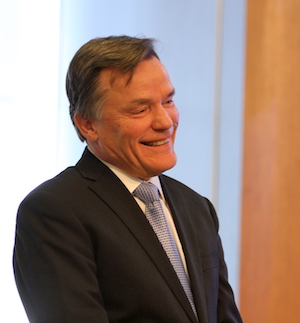 Mark is joined today by his wife Debbie, their son Nick Class of 2007, daughter Breanne and their two grandchildren Luke and Amelia.

Mark’s father is a member of the Class of 1935 and was a decorated Executive Officer of a Naval Destroyer during World War II.

Mark grew up in Baden and worked, starting at age 8, at his family’s dry goods and Catholic school uniform store. In his Holy Cross Parish, he was an altar server and sang in the choir. As a student at SLUH, Mark was a member of varsity swimming and water polo. He graduated from UMSL with his degree in Accounting and while there was Secretary of the Campus Student Council and his fraternity’s president. He also completed an MBA at Saint Louis University in Finance.

In December of 1977, he began working as an underwriter at Safety National Insurance. His whole career at the same company, in 2010 he became the CEO, instrumental in moving the company from a $1.5 million company to its present net worth of $2 billion.

Examples of Mr. Wilhelm’s commitment to the Common Good include:

Personally, Mark and his wife Debbie (who will be married 40 years the day after tomorrow – and Mark wanted us to deliver you these flowers), have prioritized being involved in their faith lives at their parish and children’s schools, St. Anselm, Visitation and SLUH. There he has been:

John’s professional background is as a Certified Public Accountant. He has worked for both “Big Five” firm and also as a partner in a local CPA firm as a tax specialist for both. John was also the Executive Vice President and CFO at Fred Weber, Incorporated, a member of the Board of Directors and one of three people making up the Executive Committee. The story of John’s commitment to the school’s mission partners his professional competency with his willingness to place that intellectual talent at the service of many and varied organizations that care for people in need and shape community. Indeed, John is a familiar person at SLUH because he is a long-time Alumni Board and Board of Trustees Member, including being a former Board Chair. But, his service at SLUH is but a small window of all he gives to community. In 2009, John was recognized as one of the top 50 community shapers in St. Charles County. An avid horseman as well, examples of Mr. Wunderlich’s commitment to the Common Good include:

The highest honor that SLUH bestows upon its alumni is the Backer Award. Named for George and Anna Backer, whose generosity brought about the creation of our campus, the award is presented to deserving alumni who best embody the principles and traditions of a Catholic, Jesuit education by serving as leaders in their communities, their professions and their church.