On the Brink of Discovery 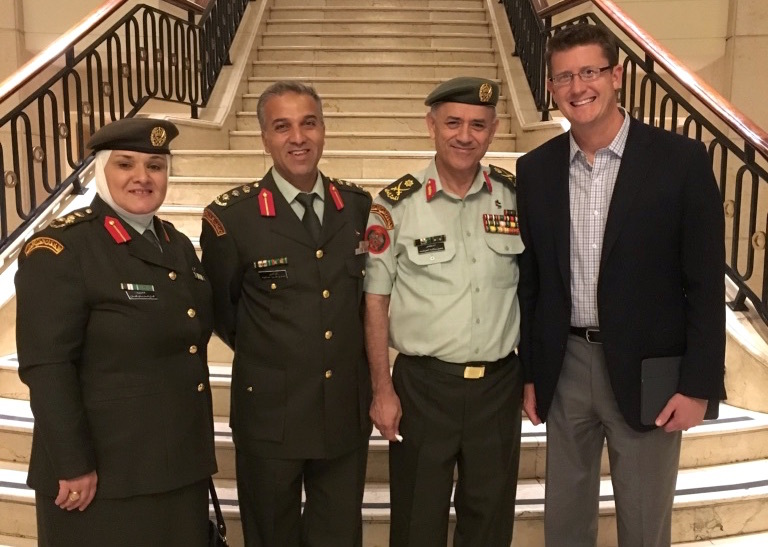 Pictured: Brian Wamhoff (far right) with Jordan National Hospital leadership (Amman, Jordan) on a October 2016 visit to present an update on his company's propionic academia rare disease program. Whereas the incidence for this disease is 1:150,000 in the U.S. and Europe, it is 1:1,000 in many Middle Eastern countries. Clinicians from 13 Middle Eastern countries attended the presentation.

During his Senior Project, Brian Wamhoff '92 watched a nine-year-old boy named Landon die from aids at Cardinal-Glennon Children's hospital. It's a moment that still sticks with him.

"I remember Landon coughing up blood in his final moments," says Wamhoff. "It was horrible. Landon looked at me as only a child can, a look that everything will be okay. At the time, I did not realize the magnitude of this gift."

Today Wamhoff is the Head of Innovation at Hemoshear Therapeutics, a biotechnology company working to cure rare liver diseases in children. He co-founded the company in 2009 in Charlottesville, Va., where he resides with his wife and three children.

"Our goal is to discover drugs for children who have a genetic mutation that does not allow them to metabolize dietary protein," says Wamhoff, a former Associate Professor at the University of Virginia who has co-founded two other medical device and therapeutics companies. "This disorder causes a buildup of acid in their blood, severe fatigue, neurological disorders and death before their second quartile of life."

Hemoshear's proprietary technology is 'almost sci-fi,' as Wamhoff explains, because it is able to take cells from livers of sick children and recreate their disease biology in a laboratory. This provides an ideal setting to explore drug intervention strategies and select drug candidates ripe for clinical success. Two of their drugs are currently in clinical trials, and if they go well, will be administered to newborns.

His company, however, faces many challenges, some political- and costrelated, but most notably the fact that the failure rate of drug discovery is about 96 percent.

"Through a lot of hard work and amazing science, I think we will have a therapeutic," says Wamhoff, who has been issued nine patents for his work in cell-based systems, medical devices and drugs. "I had always dreamed my work would be this fulfilling. It's easy to get up and go to work everyday."

After SLUH, Wamhoff earned a B.S. in biology with a minor in business administration from Rhodes College, where he was the 2011 Distinguished Alumnus. He received his Ph.D. in medical physiology from the University of Missouri.

His work in drug discovery takes him to many places, especially the Middle East, where the incidence rate of child metabolic disorders is far higher that the U.S.

In July 2016, he had the opportunity to take his own (healthy) 10-year-old son, Mark, to a patient family meeting in Denver. While Wamhoff met with parents, Mark spent afternoons with their children, going to classes with them and learning about their diseases.

"I've learned that children—sick and healthy, and contrary to what we may think as parents—are capable of handling situations that can break mature men," says Wamhoff. "It's very sad as a parent to see another child your son's age, in a wheel chair, being fed through a tube. It's very gratifying, though, to see a 'normal' child interact with them as if nothing were wrong. What is 'normal?'"

As Wamhoff continues to search for a cure, he remains grateful for his roots and inspiration. "SLUH was a comfortable place where we were pushed hard," he says. "The 'men for others' mantra had a huge impact on my perspective and offered tremendous opportunities to help others.

"When you travel a lot, sometimes you find yourself asking, 'How the heck did I get here?' For me, there were several defining moments, but ultimately my drive to help children began with Senior Project."