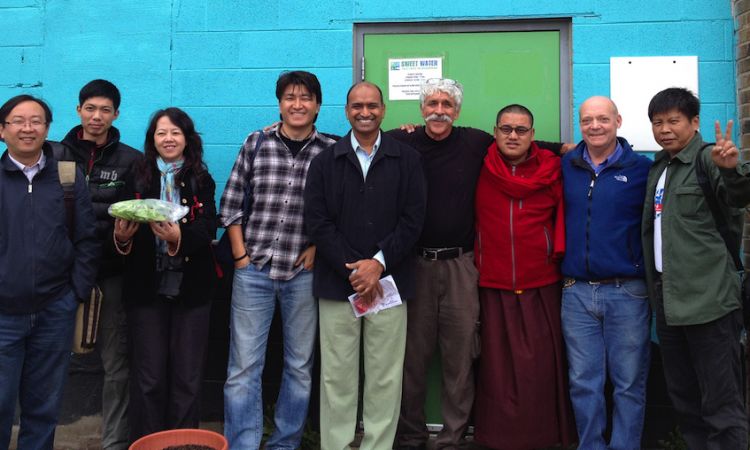 Jim Godsil '63 moved to Milwaukee in 1969 to finish his doctoral degree, but soon realized that he was not cut out for academia. "I am more of a free-range chicken," he jokes. Since then, Godsil has remained in Milwaukee, where he has become a leader in the community and sparked an urban renaissance.

The social activism movement sidetracked Godsil's college career at Saint Louis University. In the "Freedom Summer" of 1966, he volunteered with the Southern Christian Leadership Conference (SCLC), working for Dr. Martin Luther King, Jr. Godsil was a teacher, activist and "field marshal" for demonstrations held by the SCLC that summer. During demonstrations in Chicago, he was beside Dr. King as an angry mob threw stones at them.

"The police did their jobs and protected us, so we were not seriously hurt," recalls Godsil. "But the mob demolished and burned the '57 Chevy that my father helped me restore. I will never forget it. Their hatred really made an impression on me."

Godsil says his experiences with Dr. King and the SCLC inspired him to combat racism and promote peace.

In 1971, during his graduate studies in Milwaukee, he was awarded a Fulbright Fellowship to study in Tunisia. He explored the "symbolic violence and the manipulation of culture by the state." When he returned to Milwaukee, he continued his work for civil rights on a local grassroots level. He helped found the Eastside Housing Action Committee and served as its Board Chair. This community group fought against housing discrimination and worked to bring affordable housing to the minority and immigrant communities of Milwaukee.

Godsil became active in historic preservation, creating the Milwaukee Preservation Alliance while also doing hands-on work as a rehabber. He started a company called Community Roofing and Restoration in 1975. Godsil has led the restoration of scores of architecturally and historically significant Milwaukee buildings, including the Old Soldiers Home and the Pabst Brewing Complex.

According to Godsil, "It all came together for me when I got involved in the Growing Power Community Food Center in 2005." Growing Power is an organization that promotes urban agriculture and works to bring fresh, healthy and affordable foods to inner city neighborhoods.

"Growing Power brought together all of my life's passions," Godsil says. "Civil rights, neighborhood development, ecology and sustainability, promoting peace and non-violence, participatory economics...they were addressing it all. And I love projects that integrate mental and manual labor."

As part of his work with Growing Power, Godsil began exploring the idea of fish farming in an urban environment. Convinced it was economically viable, he created a company called Sweetwater Organics to grow fish and vegetables in a sustainable, non-polluting manner. He used most of his life savings to lease and renovate an abandoned factory in Milwaukee, where he combines fish farming with aquaponics to raise vegetables.

"The vegetables thrive on the waste products from the fish, and in the process they filter the water to keep the fish healthy," says Godsil.

Sweet Water Organics produces hundreds of pounds of organic, hydroponically grown vegetables and thousands of pounds of fish each year—sustainably, with no waste products.

In addition, Godsil runs the Sweet Water Foundation, which teaches these methods to people worldwide. The foundation strives to use urban agriculture as a vehicle for community development while turning waste into resource. He even brought the program to SLUH, where he worked with science teacher Bill Anderson '78 and students to create an aquaponics lab. Sweet Water Foundation, which now has a presence in Chicago and a partnership with Chicago State University, has spawned aquaponic farms producing fish and vegetables in cities throughout the world, from Shanghai to Mumbai.

"Ultimately, my goal is to turn urban blight into productive farms," he says. "In addition to growing healthy food we will also grow entrepreneurs."

And it all started with his Jesuit education at SLUH. "Anything good that I have done can be traced to my training at SLUH," says Godsil, who takes to heart the advice of St. Ignatius Loyola to 'find God in all things.' In fact, he says, "There is no easier place to find God than in a garden, especially one that shows how man and nature can work together for the benefit of both."