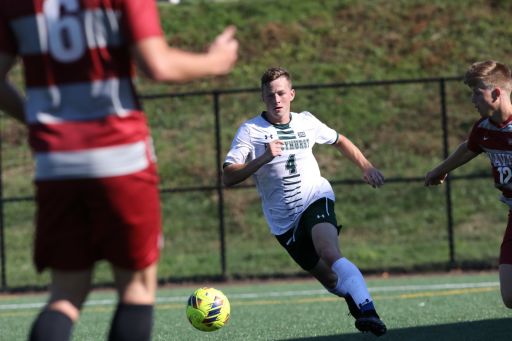 Finishing up his senior year at Mercyhurst University in Erie, Pennsylvania, Ryan Lieser '19 will graduate with a degree in Russian and Intelligence Studies this May. Currently he has a cumulative GPA of 4.0. In addition to his academic achievements, he enjoys success on the soccer field. Ryan is a two-year starting wing defender for the Mercyhurst Lakers, currently ranked fourth in Division 2 nationally with a record of 13 wins, no losses and one tie. In their 14 games this season, the defense, of which Ryan is a part, the team has allowed opponents only three goals.

Whayne Herriford '71 uses his gifts, talents and selfless spirit to help his classmates as well as those in need.

From the SLUH Archive: The 1927 tornado caused significant damage to Backer Memorial.

Avoid paying income tax on your IRA by making a QCD to SLUH.

SLUH receives two gifts that exemplify how a donor can support a beloved program in perpetuity.

The Thomas R. Schilli Foundation donated $500,000 to the Go Forth campaign.

Dulick exudes quiet courage while serving the poorest of the poor in Honduras.

Received a promotion or earned an award? Recently married, grown your family, or heard about another SLUH alumnus doing great work? Update your classmates with the Class Notes form below.