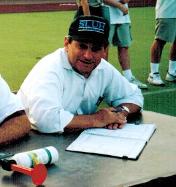 The SLUH Lacrosse family mourns the loss of Bob Casey, father of Coach Stephen Casey. Bob was a huge supporter of SLUH lacrosse from the get-go, helping start the club in 1994. He was on the parent board from 1995 until 2002, which was a year longer than any of his children were in the club. For a long time, lacrosse at SLUH was on our own, with little to no support from the school. So as a result it fell on parents to do even more and, at that time, there were maybe a handful of involved parents. Accordingly, Bob did a number of different jobs through the years, many at the same time: lined fields at our different "home fields" - Roosevelt High, Southwest High, Gateway Tech, Forest Park Jewel Box fields, Compton Drew to name a few - moved equipment, cut grass, handled uniforms, planned trips to KC and Indy to play, handled finances, planned banquets, etc, etc. When his son, Stephen, started coaching freshman, he came to every game and kept the score book or time (or sometimes both) and he and his wife planned extraordinary freshman banquets that were really special for the kids.

During the last few months as he got sicker, he would always ask Stephen about the team and how the season was going. Stephen would tell him about how successful the program was and he was very proud that the program had soared to such great heights and that we were having success.

He was hospitalized at Barnes a lot this past season, and he said he would "watch practice out the window" and we were doing a good job. He loved that kids could get cast aside by other sports at SLUH and find a home (and excel) playing lacrosse. He wore SLUH lacrosse gear all the time, even in in the last few months.

Bob was a great man, and dedicated to the program. It's people like this, that sacrifice their time and want nothing in return than to see the program flourish. The platform that Bob helped create and establish allows us to be successful today. Our condolences go out to the Casey family.

Tweets by SLUHlacrosse
Powered by Finalsite